The positives and negatives in fiber optic performance

When it comes to measuring the performance on a fiber optic connection, the three most commonly used parameters are insertion loss, return loss and reflectance. All three of these parameters are measured in decibels, or dBs and either returns a positive or a negative value.


The Positives of Insertion and Return Loss

The most commonly measured performance parameter on a fiber optic link is insertion loss (also called loss attenuation) and it is the weakening of a signal as it travels down the cable. It has a direct relationship with both frequency & cable length - as frequency increases so does attenuation and the longer the cable, the greater the attenuation. 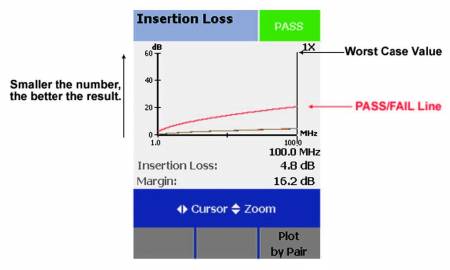 As mentioned above, insertion loss is expressed in decibels and should be a positive number as it indicates how much signal was lost by comparing input power to output power. In other words, signals always come out smaller than they go in. The lower the number, the better the insertion loss performance – an insertion loss of 0.2dB is better than 0.4dB.

However, there are instances when insertion loss can appear as a negative value. A negative insertion loss indicates a problem, one of which is often improper reference setting. Negative loss, or gainers, can also occur due to differences in connected fibers. If the two fibers have different backscatter coefficients (a fancy term for information about the relative backscatter level of the fiber), more light can be backscattered after a connection rather than before the connection. If you're only measuring in one direction, this can cause your OTDR to show a loss value that is less than it actually is, which could show up as a negative value.

But wherever there's a gainer, there's a loser. While transmitting in one direction may cause the gainer, when the measurement is taken in the other direction where less light is backscattered after the connection, the measured loss is greater than the actual loss. That's precisely why industry standards require measuring in both directions, otherwise known as bidirectional testing. The two measurements are averaged together to give you the actual loss. 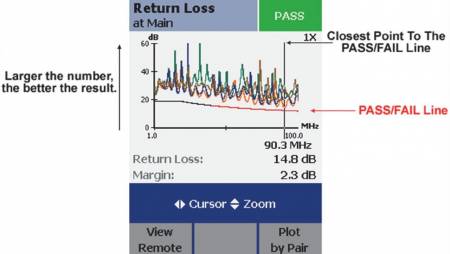 The other commonly measured performance parameter on a fiber optic connection is return loss.

Return loss, which measures the amount of light reflected back toward the source, is also expressed in dBs and is always a positive number. A high return loss is a good thing and usually results in low insertion loss - a return loss of 60dB is better than 30dB.

To remember that a higher return loss value is better, consider that if none of the light injected from the source signal was reflected back, there would be an infinite return loss.

The Lowdown on Reflectance

And then there's reflectance, which measures the amount of back reflection created by a reflective event (ie connector) compared to the amount of light injected - essentially the inverse of return loss. It too is expressed in dBs but is a negative number. The lower the number (remember we're talking negative here), the better the reflectance – reflectance of -60dB is better than -30dB. OTDR's typically use a negative value for connection reflectance.

It's not just the positive dB value for return loss and the negative dB value for reflectance that causes confusion. There is also plenty of confusion in the terminology itself as the two terms are often incorrectly used interchangeably. That's because return loss and reflectance both describe back reflection at a connector pair. However, the signs are different. One can see why when looking at how they are calculated:

In order to make measurements of optical loss or attenuation in fibers, cables and connectors, you need to have the correct equipment! Take the confusion out and use DINTEK's latest technology in testing equipment. To see the full range of testers, visit the Active Products range on our website.