The physics of fiber lasers and how they work

​Like any other laser, fiber optic lasers are devices that generate light of a special kind. The laser beam is collimated, which means its rays are parallel, and monochromatic, featuring only a single wavelength. Furthermore, a laser beam is coherent: all of its light waves are synchronized.

By comparison, the light from a normal light bulb is a wash of different colours, and spreads in all directions. It can be focused to an extent, but there are many things you can do with laser light that you can't do with 'normal' light.

The Physics of Lasers

​The word laser stands for Light Amplification by the Stimulated Emission of Radiation. Light amplification simply means 'making more of the same light', just like an audio amplifier in your stereo takes sound and makes the same sound louder. In this context the phrase 'stimulated emission' has a very specific meaning to scientists. It's to do with the physical process by which the light is created. To understand this, we need to know a few facts about atoms.

You may know that atoms are made up of electrons orbiting a nucleus. These electrons normally sit in a low orbit, called the 'ground state'. If they are given more energy, they can sit in a higher orbit called an 'excited state'.

For various reasons to do with quantum mechanics, they can only sit in very specific orbits around the atom. These specific orbits are set by the properties of the elements used, so generally speaking they can't be changed.

​When an electron is in a higher orbit, an excited state, it wants to return to the ground state - a process called 'decay'. To do so, it needs to lose energy, and this often happens by giving off a photon - in other words emitting light.

To get the electron to the higher state, the same process happens in reverse. An electron absorbs a photon to move it to a higher level. For this to happen, the energy in that photon needs to match what's required to raise the electron to that orbit. If the passing photon has the wrong amount of energy, nothing happens. As we've indicated before, the amount required is dependent on the type of material used.

Once an electron is sitting in a higher state, it will remain there for a period of time, and then naturally decay back to the ground state. That's just 'emission', rather than 'stimulated emission', so not what we want exactly. When a photon of the same frequency passes by, it encourages the electron to decay right at that point, producing another photon that looks almost exactly the same as the first one: that's stimulated emission.

The frequency (or colour) of a photon is dependent on how much energy it is given, so if all the photons are given the same energy they are all the same colour. This means that for a particular material, whenever this happens to an atom they all give off light of the same colour.

However, electrons being 'excited' to a higher state and dropping down gain doesn't happen naturally, at least not often enough to notice, so we need to make it happen.

First, we push electrons up into a higher orbit (this is called pumping). This can be done in several ways, but a common way is to bombard the atoms with light to raise the electrons.

In most cases, the electron is in an unstable state, and it will quickly move to a lower state. It needs to be in a meta-stable state for our purposes. Meta-stable means that the electron will hang around for a little while before going back to the ground state.

Laser material has to have a meta-stable state corresponding to a useful energy. In laser material, very soon after we 'pump' the electron to a higher state, it slides down to a slightly lower meta-stable state. Now there are a lot of electrons hanging around with the right amount of energy, waiting to be stimulated into giving that energy up in the form of a photon.

​All it takes is for one of the electrons to drop down and emit a photon. This will start a cascade. When that photon passes by another electron in the meta-stable state, it encourages it to drop down and emit another photon. Now we have two photons, each of which can go on to encourage two more electrons to emit, so there are four photons, and so on until we get a very large number of photons. This is 'stimulated emission', as the photons are stimulating the electrons to emit more photons.

Because of the way the photons are encouraging one another into existence, they are all the same colour, and they are all in step with one another. Now we have an army of photons marching in step together, something you don't find in nature.

If at this point all the photons rush out of the material, it doesn't work terribly well. You need to keep on 'pumping' the electrons back up so they are ready to emit photons, and keep the photons zipping backwards and forwards to encourage even more to come out! 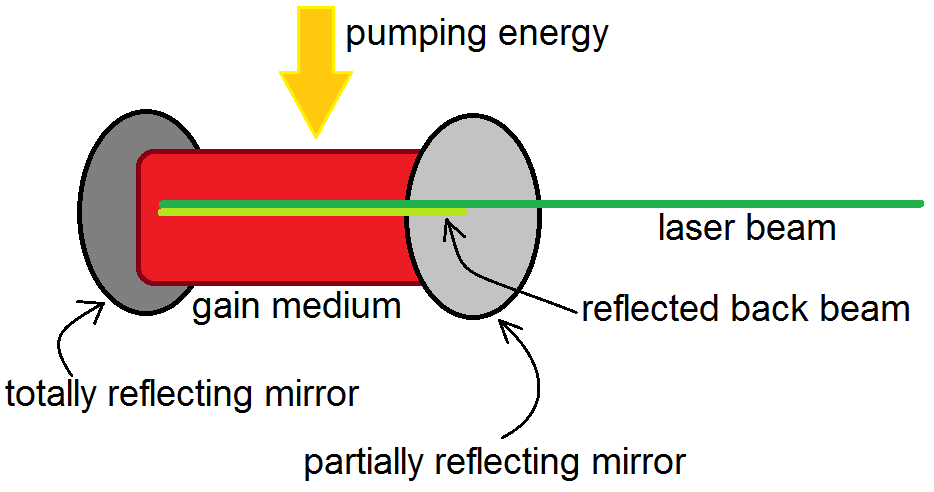 The way this is done, is by putting two mirrors in place at either end of the material (called the 'gain medium'). This creates what is called the 'laser cavity'. The mirrors reflect the light backwards and forwards, and on every round trip, more and more photons are generated.

The newly-created laser light needs to be let out in order to be useful, so one of the mirrors doesn't reflect everything. Instead, it lets a tiny percentage of the light out, and that is the laser beam.

​One of the most common types of fiber lasers is the Erbium-Doped Fiber Laser. Using an otherwise-normal optical fiber made out of silica glass, very small amounts of the rare-earth element Erbium are added.

The small particles of Erbium are mixed in to the core of the fiber when it is made. This process of introducing small amounts of another element is called doping.

Erbium is used because the Erbium atoms have very useful energy levels. There is an energy level that can absorb photons with a wavelength of 980nm, and this then decays to a meta-stable state equivalent to 1550nm. This means that you can use a cheap diode laser 'pump source' at 980nm and get a very high quality, and potentially very high power beam out at 1550nm.

Within the doped fiber, there is the 'laser medium', which is the erbium atoms. The photons that are emitted are confined inside the fiber core. To create the laser cavity, Bragg Gratings is added.

A Bragg Grating is a section of glass that has stripes in it where the refractive index has been changed. Each time the light goes across a boundary between one refractive index and another, a bit is reflected back. If you have enough stripes, the grating acts like a very efficient mirror.

The pump source is a cheap diode laser. Diode lasers produce messy beams, so they aren't very useful for a lot of the things needed. They can also be stacked, so that you get the power from lots of diode lasers being used to pump a single fiber laser with large amounts of power.

The problem is that the fiber core is too small to focus the low-quality diode laser into it. To get around this, focus the pump laser into the much-larger cladding around the core. To contain the pump laser beam, clad the fiber with an outer sheath. This way, the pump beam bounces around inside the fibre. Every time it crosses the core, a bit more pump light is absorbed.

The first reason a fiber laser is useful is because it is stable. When you want to deliver a laser beam, usually an optical fiber is needed to move it around safely. The alternative is to bounce it between mirrors, but these need to be very finely aligned. Coupling a laser beam into the tiny core of a fiber is very hard, and also needs to be finely adjusted. So normal lasers are very sensitive to being knocked or banged, and once the optics go out of alignment it takes a specialist to sort them out.

In contrast, the fiber laser generates the beam inside the fiber, so the delivery of the beam doesn't require any complicated or sensitive optics. This makes it very stable and easy to use.

The second reason a fiber laser is useful is because the beam quality is so high. The beam is generated and confined inside the small core of the fiber. In practice, this means that the beam is very straight, and that it can be focused on a very small dot. The smaller the dot, the more effective the laser will be for cutting, for example, but in many uses for lasers this quality is required.

The third reason is because they can be made to go up to very high powers. Lasers start to get to the point where they can harm your skin at around 1 Watt of power. This isn't very much power compared to a kettle or a toaster, but when it is all focused on a single point it seems like a lot! It's the difference between being gently warmed by the sun, or having a big lens focus the sun onto you, creating a powerful beam.

Fiber lasers are continually getting more powerful, and have been made with over 1,000 Watts of power (1kW). That is more than enough to cut through an inch of steel!

The fourth reason is that they are very efficient and easy to cool. Other lasers may only be able to convert a small percentage of the power put into them, but a fiber laser converts around 70-80% of the power put in by the pump source. This is better for power consumption, but it means less power is being converted to heat. The fibers can be quite long, and the heat is distributed over the length of the fiber, which protects the fiber from getting so hot that it breaks. Almost all materials change their optical properties as they heat up, so that can affect the beam quality.

As the capabilities and practicalities of fiber lasers improve, so does the range of uses they are put to. 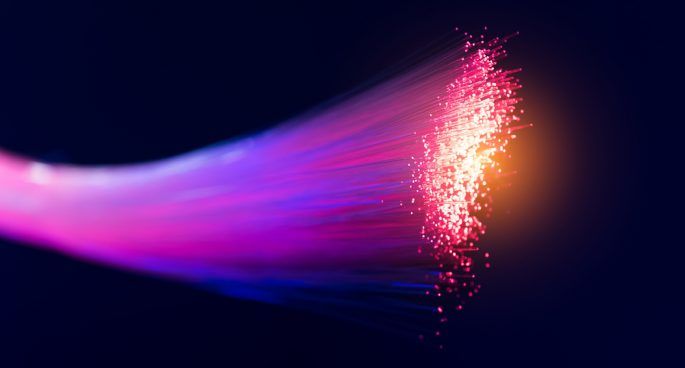